Would you rather (phrase): A game where participants must choose between two challenging scenarios and explain why

That’s the question I asked James last week; he went with the former. I said I’d rather be 8/10 happy and have one child, that seemed a decent compromise, but he disagreed. It’s cheating when you’ve skin in the game though, we’re completely biased. We have no living children, see.

We’d be better off jumping in a time machine and asking our 18 year old selves:

“Would you rather be rich in money or rich in love?”

I know none of this is mutually exclusive, but at this point, it’s starting to feel like it. I think we both would have said “love” though and so today could feel like a win. Happy and ‘rich’ yet childless.

When I was a teenager, I almost applied for PPE (philosophy, politics and economics) at Oxford Uni (yuck!), but in the end (despite these endless parallel universe ponderings!) it was the philosophy part of the course that put me off. I spent one week in Oxford on the access scheme, long story short, it was awful. A week in my summer holidays, writing essays every day and being (de)graded against my peers, who I was supposed to be making friends with (then again, it sounds a lot like what happened when I eventually enrolled at Cambridge! Ha). That aside, during the philosophy part of the day, they put a question to us. I can’t remember it exactly, but it was something like this:

“Would you rather be a goat that can feel both happy and sad, or a pig that feels permanent happiness?”

I kid you not, I was the only person in the room who chose the pig.

I understood their arguments “oh, but it’s wonderful to have a range, to feel all the feels! You can’t appreciate the high without the low” Yeah yeah, I thought, but I countered with some Will Young lyrics instead “but if I lose the highs, at least I’m spared the lows!” – perpetual bliss, what’s wrong with that?

They all thought I was simple, I thought they were all simply put off by being a pig. And that was the end of my philosophy career. I concluded that I lacked the depth to participate in their conversation, I’d already made up my mind.

Fast forward another 18 years, I still choose that pig! I often begrudge having to be on this path: of recurrent pregnancy loss, of living with baby loss, of knowing this darker world. I’ve lost the highs of being pregnant and guys, the lows are just so low. The ignorance is bliss. I choose the happy pig.

On Friday, for the final day of Baby Loss Awareness Week, I broke my self-imposed rule and I put a post on my personal social media account. I kept it simple and used this one: 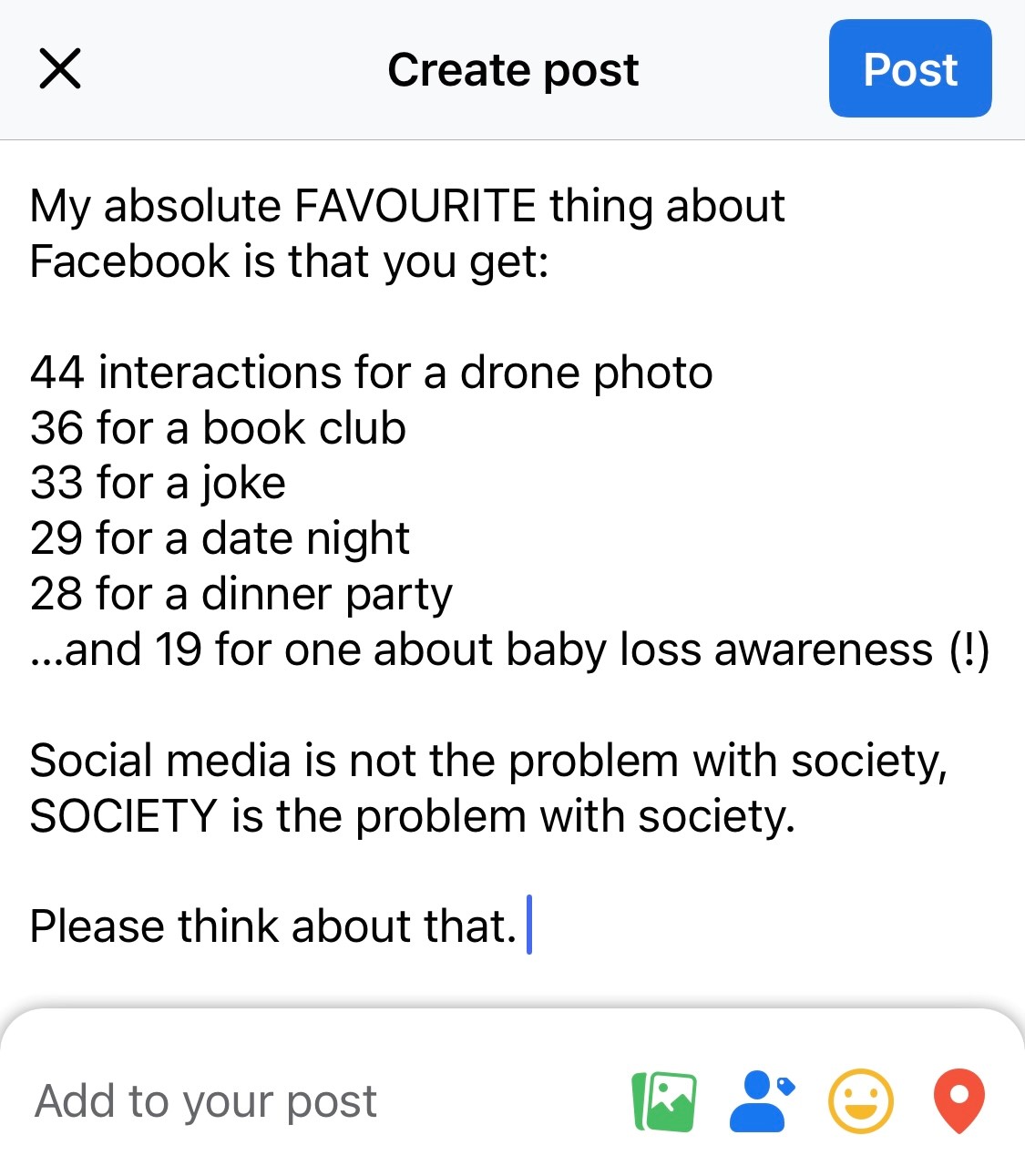 But I didn’t. I didn’t go off on yet another sanctimonious rant, because at this point people either care to support baby loss awareness, or they don’t. And I don’t need to go off on one about the concept of society – yada yada – as I’m obviously not perfect either.

If I’ve always wanted to be the happy pig, how can I begrudge others for being one? So yeah, if you didn’t support baby loss awareness week, that’s ok. You’re clearly just a Pleasantly Ignorant Guy or Girl. In my book, you’re just a PIG 😉